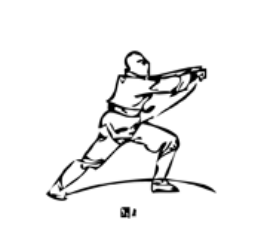 Kung Fu (Gong Fu) is a commonly misused term. A literal translation isn?t possible, but the closest we can get to in English is ?work and time/effort?. Although now commonly used to describe Chinese Martial arts (Zhongguo Wushu), in its purest sense, it describes any skill which has taken time and effort to achieve, be it cooking, dancing, or boxing. Legend has it that the Indian monk Bodhidharma

(Awakened Truth), known as Damo in China, came to teach Zen Buddhism in China. As the story goes, the Chinese monks he encountered in the Shaolin temple in Henan, although keen students, were simply too weak to meditate for extended periods, and were unable to defend themselves against frequent attacks from bandits.

Damo went into a cave to meditate and sat for seven years without speaking, at this time he fell asleep briefly, and upon awakening, was so angry with himself that he cut off his eyelids to ensure he would never fall asleep whilst meditating again. It is said that where his eyelids fell on the floor of the cave, the first tea plants grew, to keep those who would meditate for long periods, stimulated and awake.

When Damo emerged from the cave, he began to teach the monks special exercises which would make their bodies strong, able to both meditate for long periods and defend themselves against attack. It is assumed that the story is symbolic rather than factually accurate.

What is clear is that the Indian system of Yoga, which evolved from Indian wrestling, migrated along with Zen Buddhist philosophy to China. It is here that we recognise that some of the earliest martial arts were born, before travelling and mutating further in other neighbouring countries. The stretching and meditative aspects of yoga were mixed with other movements emulating animals and the changing states of nature, and the earliest Kung Fu movements were born.

It?s unfair to reduce Kung Fu to simply a martial art, it?s much more than that. Although the martial applications are obvious, it makes no sense for Buddhist monks, secluded in the temple, following an essentially pacifist doctrine, to spend their whole lives devoted to the systematic destruction of the human body. Within every great truth lies paradox, true strength comes from weakness, and true weakness must come from strength. We train to fight so we don?t ever have to; Kung Fu, to me, is a lifestyle choice.